Enjoy floods of natural light and panoramic views by installing or updating bay windows in your home. Bay windows are formed of three or more individual windows connected in an arc which creates space and offers a beautiful panoramic view. Adding a projection to the outer wall, bay windows allow for a cosy, light-filled space to sit and relax in. From both the inside and outside of the house, they give the building additional character, due in part to the extra panes. Bay windows by TP Improvements are made to measure so you can truly bring your vision to life. They can be crafted from uPVC, aluminium, or timber to fit with the style of any property. Contact us for enquiries or visit our showroom in Fetcham.

We offer a bespoke service to tailor each window installation to your custom specific needs, requirements and budget.

The Benefits Of Bay Windows

Bay windows add a beautiful, character filled feature point to the home, as well as allowing in light and creating a feeling of spaciousness. Whether you prefer traditional or modern, Bay Windows are versatile and adaptable enough to fit well into any property – from historic houses to new builds.

As Bay and Bow windows extend outward from your house, they offer enhanced ventilation as air is able to move in and out of your home at multiple angles.

Bay Windows may also add value to your property – not only do they enhance the aesthetics of a building but they also create additional space and light.

Replacing your old single glazed windows with our A rated double and triple glazing could save you hundreds of pounds on your energy bills each year. You’ll be letting light in and simultaneously keeping cold and noise out.

Alongside amazing insulation solutions, all our windows also offer a high level of security, so you don’t have to compromise on style to feel safe and relaxed.

What is the difference between bay and bow windows? Traditional bay windows (often found in Victorian and Georgian homes) actually extend the footprint of the room, so that the window space is projected outwards. This can be furnished with a window seat which makes for a sunny reading nook, or can simply add extra space to the room. Typically, bay windows consist of three glass panels, with one central picture window, and two smaller units on either side which open to allow ventilation. Bow Windows on the other hand are usually made up of at least four or five identical windows which curve round to create an arced bow shape. This means Bow Windows offer a larger internal window ledge area, rather than extending the floor space like a bay. Bow Windows might be the right option for you if you are looking to allow the maximum amount of sunlight into your home. They also work perfectly wrapped around the corner of a building, where their curved appearance offers panoramic views. 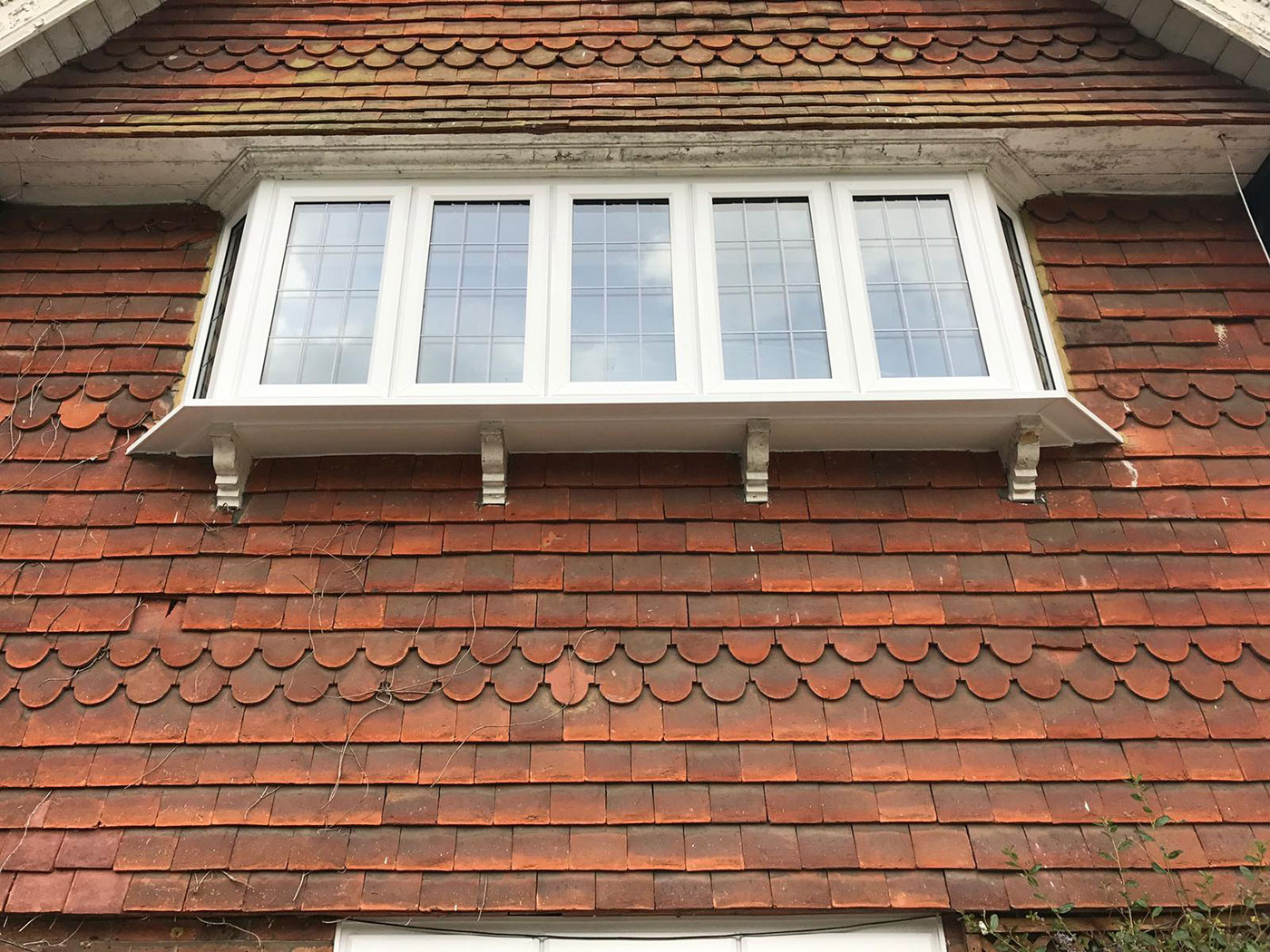 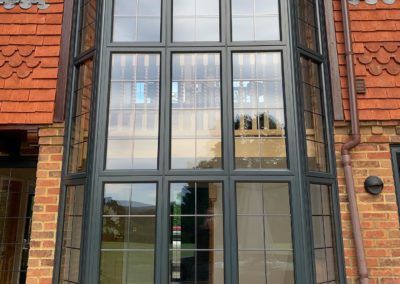 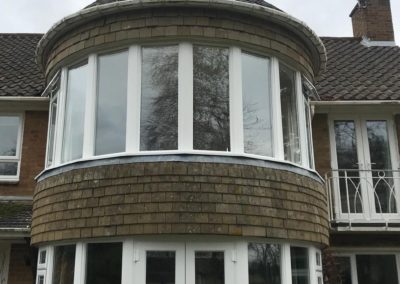 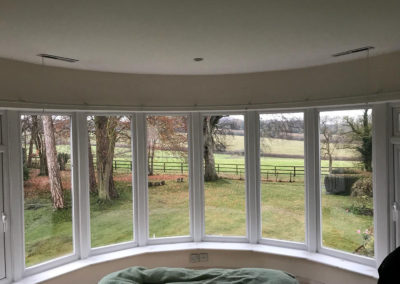 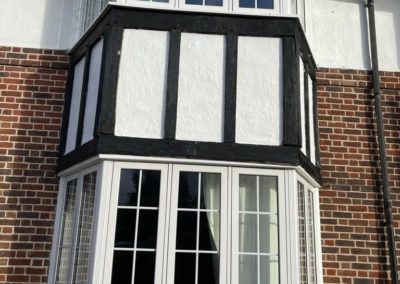 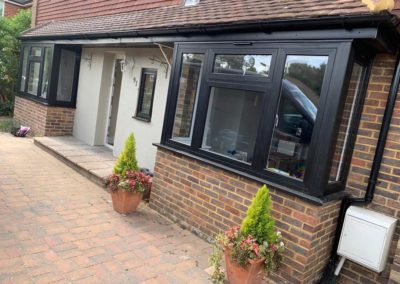 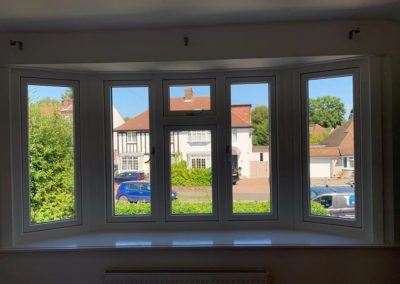 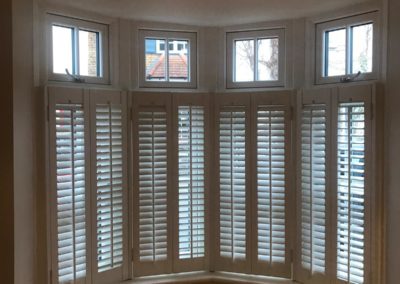 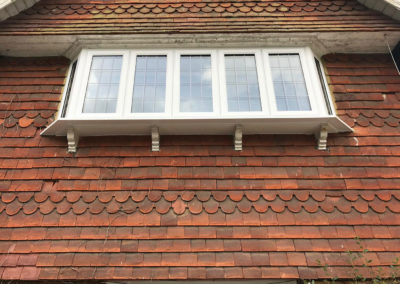 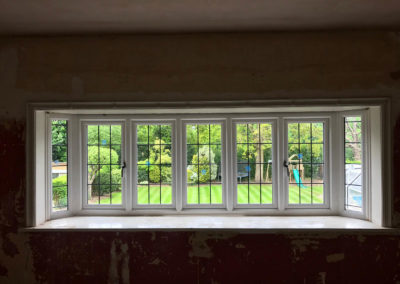 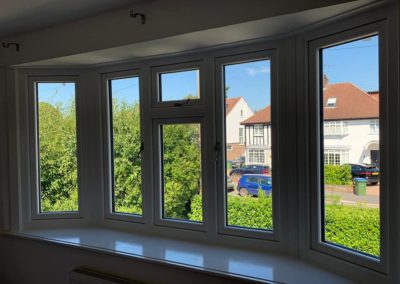 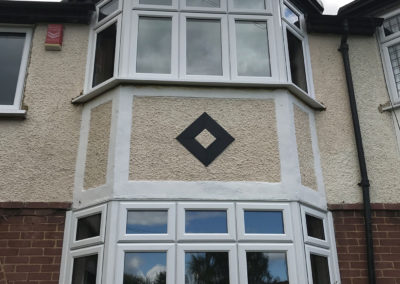 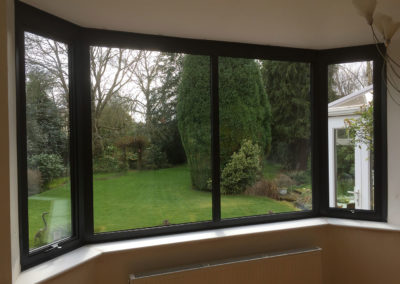 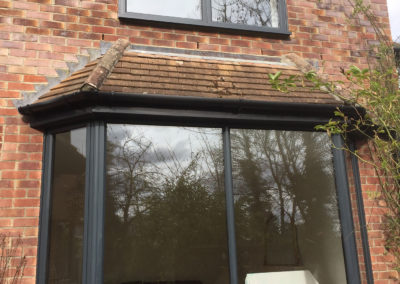 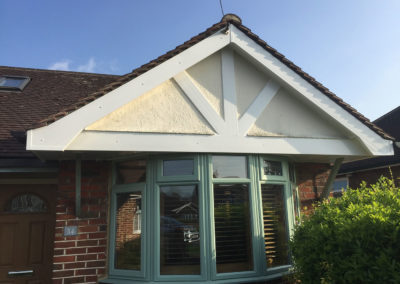 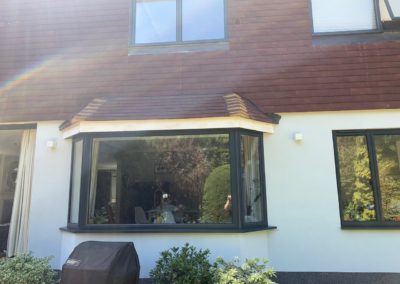 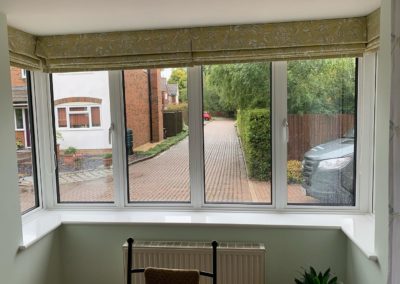 There are plenty of different options when it comes to choosing your style of Bay Windows, and you can opt for the type, material, and finish that suits your project and budget best. At TP Improvements our most popular Bay Windows tend to be either square (formed of three casement windows and also known as Box Bay Windows) or rounded Bow Windows. The style, size, material and colour is up to you: all our Bay and Bow windows are made to measure so that you can find exactly what you are looking for. We offer Bay and Bow windows in a variety of materials – principally timber, uPVC and aluminium. Take a look at our gallery of Bay Window Inspiration below, to have a look at some recently completed projects.

Depending on your personal preference and the style of the house, we offer sliding sash bay or casement bay windows that you can choose to configure in the styles discussed below. Chat to a member of our team to discover which would work best for you.

Square Bay Windows – or box styles – are some of the most popular types we provide to customers. They consist of one large window with two smaller windows on either side at 90 degrees to create a box-like shape that protrudes from the edge of the building.

However, if you prefer softer angles, or are looking for some alternative Bay Window ideas then you might be interested in the following configurations:

Semi-Hexagonal Bay Window: A semi-hexagonal bay window is formed of three equally sized window units which projects out of the wall of the building to form the shape of half a hexagon.
Semi-Octagonal Bay Window: Just like a semi-hexagonal bay window but made up of four units instead of three, full of character and optimum for allowing in light and offering amazing views outside.

Triangular Bay Window: The triangular bay window is simply two windows protruding out in a single point. A unique way of adding character and charm to any property, and great around a corner.

Circle Bay Window: An alternative version of a bow window, circle bay windows join a combination of windows together around a smooth circular area (with panels of wall separating the windows). This style became popular during the gothic era and is often found in the front living and bed rooms of older houses.

Oriel Bay Windows: oriel refers to bay windows that are found above the ground floor of a building. Popular in tudor homes, this style is often supported by wood brackets that match the exposed timbers on the rest of the facade. Casement bay windows were common in Tudor architecture, often used in groups of two or three. Chat to our team to discuss how an Oriel Bay Window might work in your home. 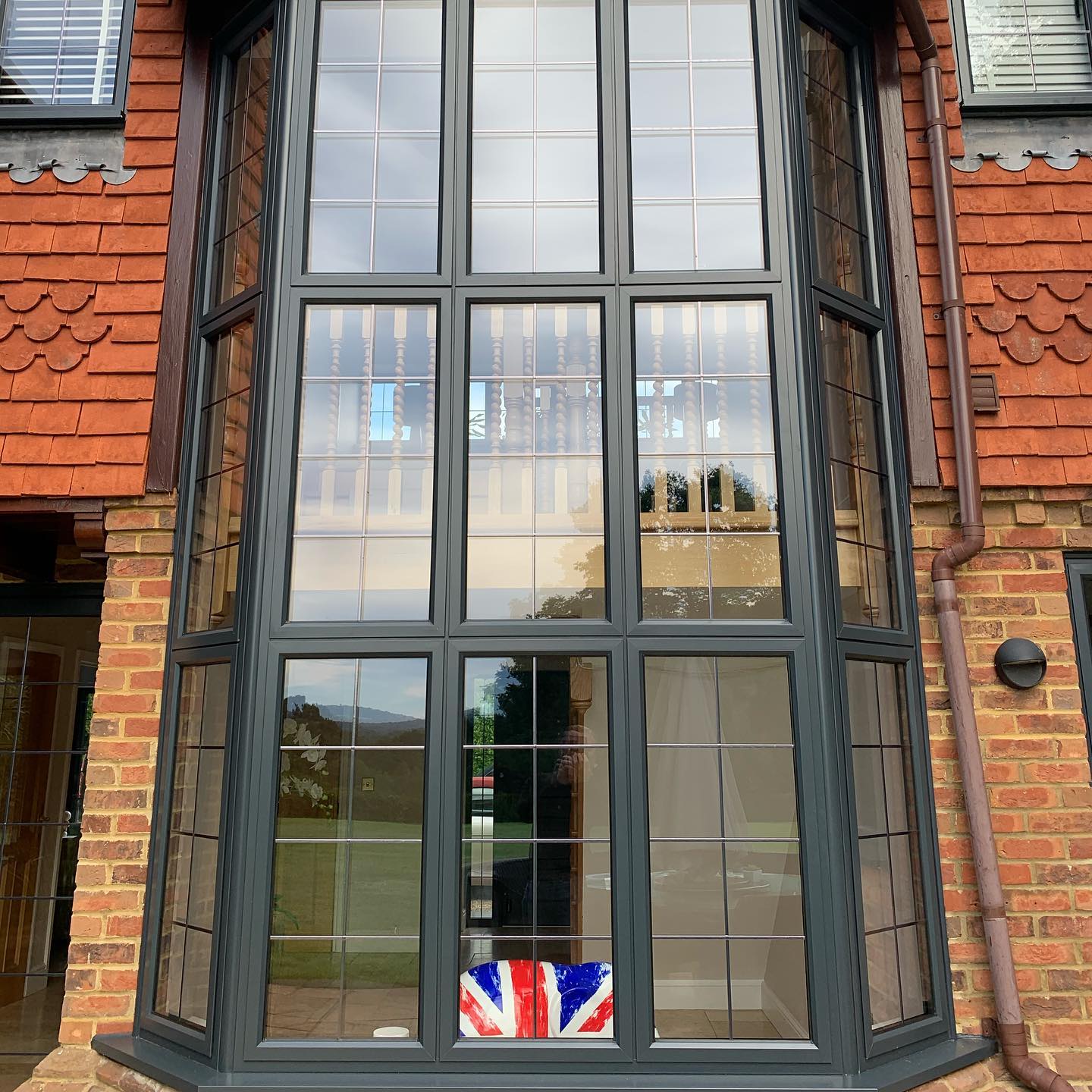 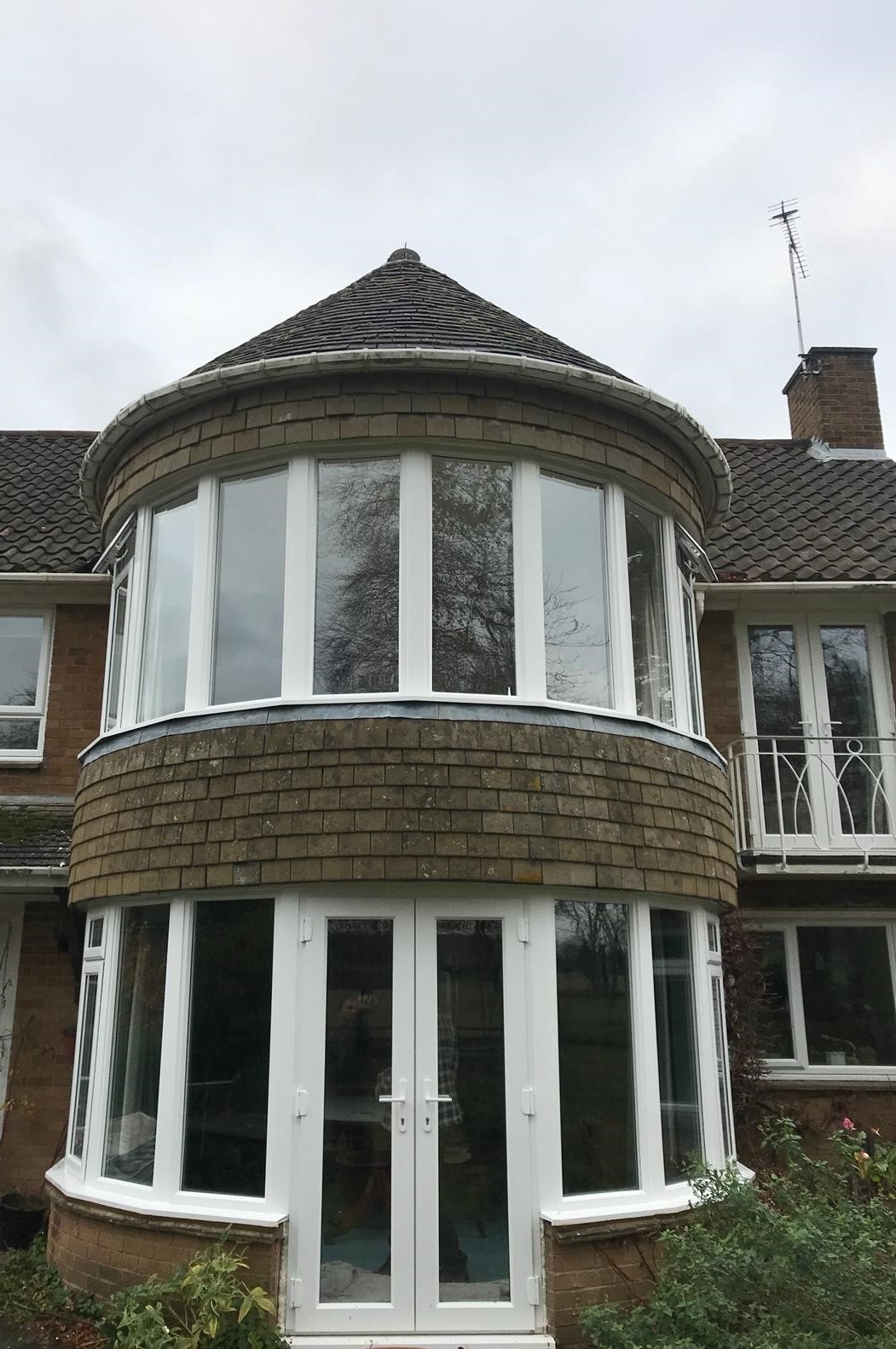 Aluminum is a reliable choice as the strong, durable material is virtually maintenance free due to its corrosion and resistant strength. It is well suited to modern bay & bow windows as its minimalist look compliments the large swathes of glass. Your aluminium window will never rust, rot, peel, flake or warp. Aluminum is thinner compared to other framing materials such as UPVC or timber, which results in a higher ratio of glass and makes for a clean, discreet look.

uPVC, or Unplasticised Polyvinyl Chloride, is a highly durable, low-maintenance building material commonly used to frame double and triple glazed windows. uPVC has very low thermal conductivity, which means it naturally insulates in a manner similar to wood. This means that uPVC is ideal for keeping heat in, cold and noise pollution out, and ensuring that your home is secure. Also known as PVC and PVCu, uPVC is a cost effective alternative to wooden or aluminium window framing. uPVC is also available in a huge change of colours, as well as a Timber Alternative. Browse our gallery below for uPVC Bay Window inspiration to see examples we have fitted, and decide whether they are just what you’re looking for in your home.

Wood is a natural insulator which makes timber windows one of the most energy efficient choices. Like uPVC, wood framing reduces heat and cold transfer, as well as noise. Timber framing on your windows is also an excellent choice if you are looking for a beautifully timeless bay window that will be able to blend into an older property or meet the requirements of the planning/conservation officer.

Our Trusted Suppliers In Bay Windows

We are proud to work with trusted and reputable bay window suppliers, offering choose, premium products and solutions to suit everyones budget.

ALuK are an international designer and engineer of aluminium building systems based in Chepstow, Wales. They engineer the finest, tailored aluminium façade systems. All ALuK’s products are developed and produced by their in-house research and development team. We stock ALuK’s 58BW flush aluminium window range, which combines minimal sightlines and maximum weather resistance with advanced performance, versatility and security.

Established as a family business in 2002, Origin are the UK’s leading specialist manufacturer of bespoke aluminium Bi-folding Doors and Windows. Origin’s products combine high grade aluminium with precision engineering to create functional and elegant windows which are designed to last. We offer the OW-70 range which provides the thinnest sightlines for more natural light and less window profile.

The Schüco Group is a global developer of system solutions for windows, doors, façades, sliding systems, security technology and much more. With 12,000 partners in over 80 countries the German company truly is a market leader in aluminum building solutions. We install the Schüco AWS 70, which offers an attractive range of solutions with outstanding thermal insulation for the 70 mm basic depth.

VEKA Halo Casement Windows are uniquely designed to offer first-rate functionality and quality to meet a range of project demands. The technically advanced multi-chambered system of Halo System 10 has a variety of reinforcement options and thermal inserts for advanced performance, enhanced security and thermal insulation benefits.

We source all our timber window framing from premium quality, bespoke, and experienced suppliers based in the UK. Wondering where to find custom blinds to fit your Bay Windows? For Bay Window blinds, we recommend Morley Glass Blinds. Checkout their brochure here, or pop into our Fetcham showroom to learn more.

WHAT OUR CUSTOMERS SAY

Looking to extend your living space with a Bay Window? Contact our team today to find out more and request your free estimate.

GET A FREE QUOTE

GET A FREE QUOTE

Looking to extend your living space with a Bay Window? Contact our team today to find out more and request your free estimate.

Find us on Google Maps

DISCOVER MORE:
Home
About Us
Why Us
Gallery
FAQs
Reviews
Contact

We are one of the leading window & door specialists servicing local customers across Surrey including Fetcham, Leatherhead, Ashtead, Cobham, Bookham, Esher & many other surrounding towns. We come highly recommended by our customers & boast a portfolio of projects including conservatories, bi fold doors, lantern roofs, bespoke window replacements, garden rooms & much more.

As a family run business, your continued support to local businesses like ours is greatly appreciated. If you’d like to tell your neighbours about the service that you’ve received from TP Improvements, then please leave us a review.